If you are a publisher interested in publishing the frisbee game Chopdisc, then please contact the designer Nico Pierik here. The game manual is written in Dutch, a translation into English can be done if so required by a publisher. 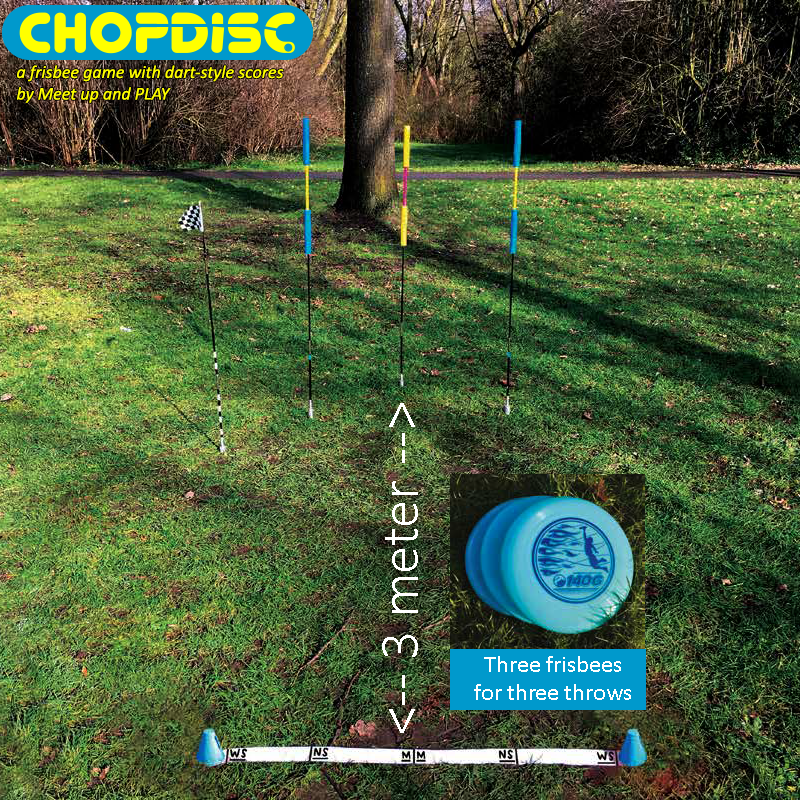 Chopdisc has been invented on the 17th of July 2019 by Nico Pierik in Nieuwegein, The Netherlands.

1 How to play a Chopdisc set? 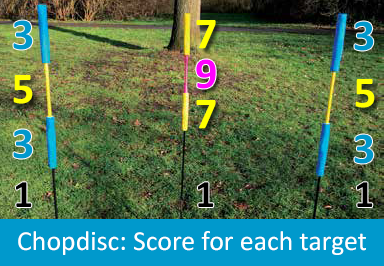 Chopdisc is played over several sets (e.g. best of 3 or best of 5), and just as in darts, the goal of each set is to reach a score of exactly zero within the lowest number of throws. Chopdisc starts with 54 points. The Target with the highest score is the Pink Sweet Spot with a score of 9 points. See the picure above for the other Targets and their scores. The “finish” flag pictured left in the image at the top of this page, is used as a wind flag. Since it is useful for players to know where the wind is coming from.

Each player starts with a score of 54 and attempts to reduce it to zero by hitting Targets (in different colors) on the Stick Targets. In turn, each player throws three frisbees from a distance of 3 meter.

After each throw, the player reduces their score by the point value of the first Target hit. Players must wait between throws for the Stick Targets to become still again. Because a moving Stick Target would become a larger Target, and that would be unfair. After all players have thrown three frisbees, it is the first player’s turn.

A player can throw a perfect set by hitting the Pink Sweet Spot (with a score of 9 points) six times to score the required 54 points to reach a score of exact zero. The perfect set is called The Woodpecker. Of course, players will usually need more throws than that to get to zero. Invalid throws or misses also count against the player, noted by placing an X on their scorecard. The player who has managed to get from 54 to exactly zero within the lowest number of throws, wins the set.

There is even the possibility of multiple players ending exactly on a tie, on both their number of throws and highest point values hit. In the event of such a tie there is a tiebreak to decide who is the winner. For the complete description of the tiebreak players can consult the printed game manual (not available online).